Should You Just Learn Cover Songs In Your Guitar Lessons? 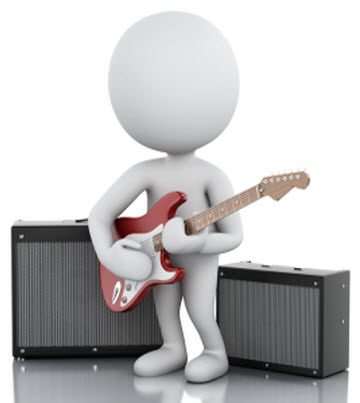 I’d like to take a few minutes to tell you a story about an imaginary guitarist called Frank. Like many guitarists, Frank decided to start learning guitar so that he can play the music that he loves listening to. And that’s great—I can’t think of a better reason for wanting to learn a musical instrument. 🙂

Once Frank gets his new guitar, he then tries to teach himself some of the songs he likes, using videos on YouTube. It doesn’t take him long to realise a couple of things…

Upon realising that self-teaching is going to be a futile endeavour, Frank contacts a local guitar to arrange some lessons.

Once lessons start, Frank soon starts to get frustrated about a few things…

Because of these frustrations, Frank quits his guitar lessons after just a few months. At this point he knows some of the basics of playing guitar, and can play some very simple songs from start to finish.

One of the guitar teachers replies to his email and says that they can definitely help him. Frank is thrilled by this, and is really excited to start lessons with the new teacher.

Frank Comes To A Startling Realisation

Because Frank is only learning his favourite songs, he stays with the second teacher for around a year. Over this time, he was taught a huge number of songs that he likes. But one day, when reflecting upon his guitar lessons, he has a couple of startling realisations…

The irony in the story is that the first guitar teacher was probably doing a really good job of teaching. And if Frank had the patience to stick with that teacher over the long-term (i.e. years), he would now be able to play many of his favourite songs.

But before you judge Frank harshly for his poor choices, it’s important to realise that he’s not alone. Many people that haven’t learnt to fluently play another instrument, have no real concept of what it takes to get competent on a musical instrument. Because of this, they don’t realise the downsides of only learning cover songs in their guitar lessons.

Although learning cover songs are often a core part of guitar lessons, they definitely shouldn’t be the ONLY thing that your teacher focuses on. This is because…

Even if learning covers songs was your main reason for starting guitar lessons, they’re definitely not the only thing you should be learning. A good guitar teacher will almost certainly supplement the songs with things that develop your musical and technical skills in a systematic way. So be sure to keep an open mind, and work on those things hard—doing this will help you in the long run! 🙂