Help – I Play Badly In My Guitar Lessons! 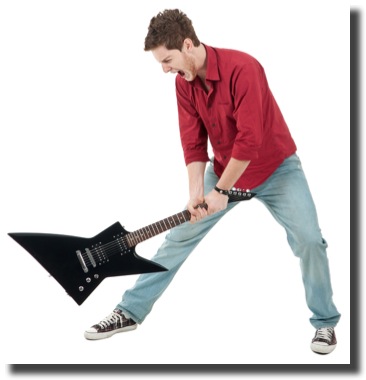 Let’s imagine a guitarist called Johnny. He’s just spent the entire week diligently practicing what his guitar teacher gave him at the last lesson. He’s pretty happy, because he feels he’s made great progress over the week—especially with the new song that he’s been working on. So he’s really looking forward to his guitar lesson, and is eager to show his teacher the fruits of his labour.

But when Johnny’s teacher asks him to play the song he’s been practicing, he makes a lot of mistakes. He even manages to totally screw up things that he could play perfectly at home. And because he’s making so many mistakes, he starts to get really nervous—which, or course, makes him play even worse!

Can You Relate To This?

If you’re currently taking guitar lessons, then maybe you’ve had similar experiences. Perhaps you frequently have the frustration of playing worse in your guitar lessons than you do at home.

If this is the case, then this article is for you. 🙂

I need to say upfront that it’s extremely common for students to play worse in the lesson than at home. So don’t feel bad if it happens to you—there’s absolutely nothing wrong with you! 🙂

But why does it happen?

Well, I’m not a psychologist. So I can’t give you the deep-seated psychological reasons why might this happen. But I’ve taught enough guitarists over the years, to come up with a list of a few of the most common reasons…

If you go to your guitar lesson directly from work or school, then this probably means that you haven’t played guitar before your lesson. And because there won’t be time in the lesson for a long warm-up, this means that you’ll be demonstrating things to your guitar teacher after a minimal warm-up. This usually means that you won’t play as well as you do at home, where you’ll have time to warm-up thoroughly.

Stress And Tiredness From The Day

If you’ve had a particularly stressful and tiring day at work or school, then it’s probably going to negatively impact how well you play in your guitar lesson. Most people play best when they’re in a state of relaxed alertness—so feeling agitated, or really sleepy, won’t do much to enhance your guitar playing skills! 🙂

When you’re practicing guitar at home, you’ll often be doing it by yourself, with no one watching. Even if you do have family members that occasionally pay attention to what you’re doing, they’re probably not going to make you feel particularly nervous.

But when you’re in your guitar lesson, you’ll be demonstrating your guitar playing to a much better guitarist, who’s paying extremely close attention to what you’re doing. If you haven’t had a lot of experience in performing, then you might find this very nerve-wracking. (This nervousness will almost always make you play worse).

I’m not sure who came up with this saying, but I love it! 🙂

Professional guitarists have to be able to play well under pressure. They also need to play guitar to a high-level, even if they’re sick, tired, nervous, hungry or not fully warmed up! Because of this, they need to learn things on a much deeper level than amateurs—and their practice habits reflect this.

If you can play something well at home, but not in your guitar lesson, then it often just means that you simply haven’t practiced it to the degree that a professional would. So your playing is probably going to fall apart a bit, or a lot, when you’re put under pressure. And that’s OK—if you’re doing it for a hobby, then it’s not necessary to internalise things to the same extent as a professional. (Although you might want to, if your goal is to be an extremely accomplished amateur guitarist).

What To Do About It

To be honest, I don’t think it’s a problem. It’s perfectly normal for a student to play better at home, than when they’re in their guitar lesson. So I really don’t think there’s anything to “fix”.

But if it bothers you, then the simplest thing you can do is to record or videotape yourself playing on a regular basis. As well as being very beneficial to your guitar playing, it will accomplish a couple of other awesome things…

There’s no need to feel discouraged if you play better at home, than when you’re playing in front of your guitar teacher. All experienced teachers know that this happens! Just continue practicing as hard as you can, and try not to beat yourself up if you make some mistakes in your lessons.